History on fire, from Notre Dame to Napoleon

Why do we cry when old buildings burn down? On Monday evening, life stopped for many people while the Cathedral of Notre Dame was on fire. Why does the fate of a single historic building inspire such emotion and attention?

Eight years after Napoleon’s coronation at Notre Dame, French armies were occupying Moscow while the city burned around them. The revolutionary writer Alexander Herzen began his memoirs with an account of the disaster. A baby at the time, he relied on his nanny’s memories to reconstruct events. ‘We all hurried out of the courtyard, the fire was more and more dreadful,’ she told him. ‘Worn out and with nothing to eat, we got into a house that was still untouched, and set about getting some rest; in less than an hour, our people were shouting from the street: “Come out, come out! Fire! Fire!”’ The great fire of 1812 is burnt into Muscovite identity, bringing together protective feelings for the city, memories about former generations, and fears of foreign invasion. 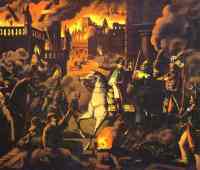 Notre Dame, meanwhile, fostered many such emotions within just one building. In his widely praised address to the nation, President Macron emphasized the unity of feeling that the disaster inspired, among Parisians, French people and the entire world. But while Notre Dame has been the site of great communal events, it has also inspired contrasting emotions. Like any building that is so many hundreds of years old, it is a contested space as well as a unifying one.

People have powerful feelings about Notre Dame for many different and contradictory reasons, well documented in coverage of the event. But what causes such a unity of sadness and relief at this moment is the connection to the past that the building itself makes possible — and the fearful trepidation that comes when connections to the past are snapped. With the cathedral still under threat, the owner of a nearby bistro says that ‘a thousand years of history has gone away’. When the blaze was under control, Macron can tell the French people: ‘The fire at Notre Dame reminds us that our history never ends.’

Back in 1813, in post-fire Moscow, people of all classes contributed generously to funds set up to save the destitute and rebuild the city. Muscovites sought proof that the great fire was not the end of Moscow’s history but only one connecting point in its longer story. They found solace in the end of the Time of Troubles in 1612-13, exactly two hundred years before, when Muscovy was in grave threat and Moscow itself was briefly occupied by the Poles, before the new Romanov dynasty restored order. By 1818, with recovery underway, the unshakability of Moscow’s history was retold to a shell-shocked generation in two ways. First, a new monument was inaugurated on Red Square to those who brought the Time of Troubles to a close. Second, Nikolai Karamzin released the first volume of his great History of the Russian State, which argued that the long-range continuities in Russia’s history were the basis of its future. Calling for the restoration of Notre Dame while the embers were still lit, President Macron seemed to have the same instincts, and to understand history in the same way.