Is Vladimir Putin a conservative? 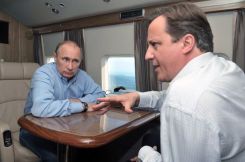 You learn to tell your right hand from your left when you’re little. It’s a lesson that British politics seems to have forgotten, as polling day approaches in the general election.

The Labour and Conservative Parties have ceded so much territory to each other over so many years that ‘Left’ and ‘Right’ mean less and less. From secure redoubts in the centre ground, they argue bitterly over how to manage two or three per cent of the country’s GDP. Appropriately enough, opinion polls tie them in a dead heat.

The politics of the centre is a good thing — as long as people can tell the difference between parties of the Left and Right. But it’s not easy to define conservatism in Britain a week away from the election. And it’s equally tricky to decide whether the Russian President is a conservative or not.

Journalists scarcely skip a beat between describing Putin as a belief-free political cynic and then labelling him a convinced neo-fascist. But if he does belong somewhere on the Right, one might point to ‘right-wing’ authoritarianism (the emasculation of the media), far-right actions (the ethnically-justified annexation of neighbouring territory), and conservative tastes (praise for age-old Russianness).

But there are aspects of Putin’s record over fifteen years that seem liberal, such as the economic policies of his first term, and even leftist, especially his concessions to Soviet nostalgia: concessions which are usually rhetorical but occasionally extend to welfare policy. And authoritarianism, of course, is scarcely limited to the Right.

This political confusion is partly a consequence of Russia’s history. Conservatism there is historically weak. Associated with the state, it’s not an ideology that stands up to power. Self-sufficient, dynamic and entrepreneurial as many Russians are, they don’t owe these traits to the supportive policies of a conservative party. By contrast, calling Putin a conservative is to invoke a complex history of bureaucratic politics and political thought in Tsarist Russia and the USSR that probably has little relation to today’s realities.

Meanwhile, the Conservative Party in Britain struggles to articulate its convictions or even to explain its successes. The conservatism of Vladimir Putin and David Cameron alike is weighted down with historical and cultural burdens; it seems knocked out of shape and difficult to define. For the British electorate, Cameron’s description of his conservatism is unclear, lacking in sympathy and conviction. If Putin extends a sharper message to Russians, it’s not because it’s a conservative one.

This entry was posted on April 30, 2015 by beyondthekremlin in Russia past and present and tagged Russia today, Russian politics, Vladimir Putin.