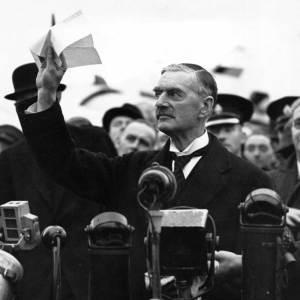 For some people, Neville Chamberlain and Adolf Hitler are never far away. ‘We run the risk of repeating the mistakes made in Munich in 1938,’ David Cameron apparently said (of Ukraine) earlier this month. Back in April, Garry Kasparov, the chess Grandmaster and democracy campaigner, wrote a Time article on Ukraine under the headline ‘Obama’s Munich moment’, citing the words of John Kerry, the United States Secretary of State, who had called the Syrian crisis ‘our Munich moment’ in September 2013. In the spring, Prince Charles controversially mused on similarities between the foreign policies of Adolf Hitler and Vladimir Putin. And only a couple of days ago, an EU official who was present at EU-Russia-Ukraine talks warned that ‘It is Munich 1938.’

The Munich summit of September 1938 between the German chancellor and the British prime minister was the third of three ‘appeasement’ meetings. Chamberlain stepped back from confrontation, accepting Hitler’s promises about German intentions in Czechoslovakia, and claiming that he had secured ‘peace in our time’. Of course, the Germans invaded anyway shortly after, the chance to nip Nazi expansionism in the bud had been missed, and global war ensued. Interpreted ever after as the failure to stand up to a tyrant, ‘Munich’ is eternal shorthand for weak, short-termist, counterproductive diplomacy. Churchill himself came to dispute this reading of Munich, in a generous tribute when Chamberlain died in 1940; and Tony Blair, no less determined a statesman than Churchill, said similar things in his autobiography.

For seventy-five years, almost every stage of every diplomatic incident has been compared to the run-up to the Second World War. It is as if thousands of years of diplomatic history have yielded only a single reference point to guide those who make and report on foreign affairs. But as the journalist and Russia-watcher Ben Judah tweeted earlier this month, ‘Putin is not Hitler. Russia is not Nazi Germany. Those who try to convince us of that have their own motives.‘ Tony Brenton, a former British ambassador, recently wrote: ‘The “we must stand up to Putin as we did to Hitler” line is pure schoolboy politics. Putin, of whom I saw a fair amount as UK ambassador to Moscow, is not an ideologically driven fanatic, but much closer to Talleyrand – the calculating, pragmatic rebuilder of his country’s status in the world.’ So perhaps history does offer other ways of understanding Russian policy and the crisis in Ukraine that go beyond Munich 1938. What are they?

In a superbly accessible analysis, Alexander Titov, a historian at Queen’s University Belfast, reminds us of still other historical vantage points from which to look at the Russia-Ukraine confrontation. He suggests that an accumulation of sanctions — the model of the post-1918 settlement at Versailles — is unlikely to bring Russia closer to the mainstream of Europe and to construct a durable way of conducting international relations in Europe.

And, Titov argues, the summit between Stalin, Roosevelt and Churchill at Yalta in February 1945 is also an unhelpful precedent. It was at Yalta that the soon-to-be victorious powers defined their post-war spheres of influence. But no longer is the world divided into a communist East and a capitalist West: no longer can, or should, smaller European countries, not least the culturally divided Ukraine, simply be assigned to the control of Russia or ‘the West’. Titov seems to suggest that this very way of thinking about Europe — East versus West, or Russia against the rest — will be unable to solve any European confrontation.

Instead, he suggests that we go back to 1815 and reflect on the Concert of Europe that kept the peace after the end of the Napoleonic Wars. This was a lowest-common-denominator system of international relations: one that brokered a durable peace by protecting the interests of every major power. If such a system had existed in our own time (and the UN Security Council lacks its ‘inclusivity’ and ‘flexibility’), then NATO’s pushing ever eastwards and Russia’s incursions and annexations in Ukraine would both have been considered intolerable and reckless.

Far from being demolished in 1991 when the Soviet Union collapsed, the Cold War framework for international relations survives, both in the institution of NATO and in the mentalities of policymakers and observers everywhere, from Moscow to Brussels to Washington (via London). In such a framework, it becomes difficult to recognize that Russia has any legitimate interests in European affairs at all. The current crisis in Ukraine is at least as much a consequence of this major structural failure of international politics as it is of particular personalities or events.

In February 2007, Vladimir Putin went to Munich to make a robust speech about Russia’s place in the world. By sharply criticizing American ‘unipolar’ domination, he was seen as bringing a chill into foreign affairs. But much of the speech was a plea for Russia to be respected and for its interests to be taken seriously. Putin’s Ukraine policies, whose likely aim is a neutral Kiev, still seem to flow from that agenda. It is fantastical that Putin has a mission to conquer Eastern Europe. Munich 2007 might yet have more to teach us than Munich 1938.

This entry was posted on September 22, 2014 by beyondthekremlin in Russia past and present and tagged Cold War, Russia-and-the-West, Ukraine, Vladimir Putin.